Hey guys! How’s it going on? Yes, Dragon Ball Super may have ended its TV show, but that doesn’t mean the franchise is wasting away. In a few months, Toei Animation will share its first Dragon Ball Super film, and its video game collection will grow over the year. Akira Toriyama may not be so involved in all of these projects but he is there.

So, if you want to see the artist’s newest Dragon Ball characters, then here you go! We finally got some new updates and it’s the original character designs by Akira Toriyama himself for Dragon Ball Legends! Dragon Ball Legends, not only added a brand new Saiyan to the series which may be canon but also a mysterious new swordsman as well. When the scans of this new swordsman went live, twitter went crazy for a little while. As the setting for DB Legends is set just after the Tournament of Power with warriors from different timeline / times. Thanks to some newly released information, fans now know a little more about this.

Before getting into that, I think you should at least read the summary / description of the game first. This setting might be canon and may be used in the anime later on, so – “With the chaos of the Tournament of Power behind them, life went on for the inhabitants of Universe 7. But their peace was short – lived…

Fighters from across the ages were soon drawn together for a timeline-splicing battle royale! Goku fought his way past one fierce foe after another, until a mysterious figure appeared before him…. A saiyan boy, dressed like none he had ever seen before…” Yup, Saiyan from a different time… Well, isn’t this interesting? 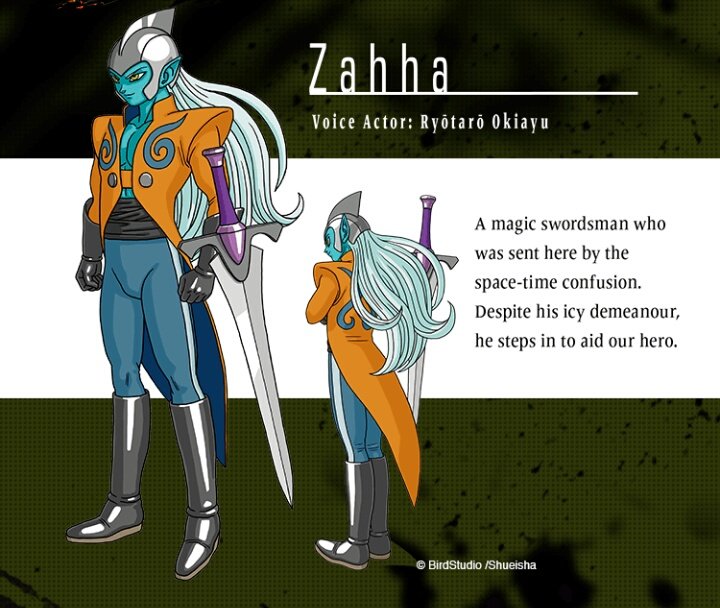 The new swordsman, introduced in the first trailer for the upcoming Dragon Ball Legends, is named Zahha. According to Shueisha’s official character description for the character, Zahha is a “magic swordsman who was sent here by space-time confusion. Despite his icy demeanor, he steps in to aide our hero.”

He’ll be voiced by Ryotaro Okiayu. Zahha’s design is great as well as this swordsman seems to be able to fight while a floating sword stands at his side. The series has not had such a swordsman in the past, and with a design from series creator Akira Toriyama, Zahha seems to be an intriguing addition to the franchise.

The game revealed descriptions for two other characters as well such as the mysterious new Saiyan Shallot, who has forgotten memories of his past, and a mysterious “Hooded Man” who “seems” to resemble the new Saiyan Shallot. That hooded man is definitely Shallot just from another time line or something.

According to V-Jump, Shallot was created by Toriyama along with Zahha and an unnamed character known as Hood Man. The magazine revealed images of the trio, and fans are already theorizing what the gang could be up to. The final story could be Shallot & Zahha vs Villain Shallot (Hooded Man). What do you guys think?